You are here: Home / Health Communication / 2 ways to improve your medical metaphors

A physician was talking with me about an article I wrote on metaphors, a few months ago.

He agreed it was a hot topic, and an important one to stop and take time to consider:

“Metaphors and analogies are something we do casually, without much thought,” he said. “Sometimes the metaphor did not give the message you wanted it to give.”

Medical metaphors are powerful, but advice is scarce when it comes to creating or improving them. Here, I’m giving you two tools to help you think about your metaphors, so you can have a better chance of giving the message you want to give.

Why metaphors are such a big deal 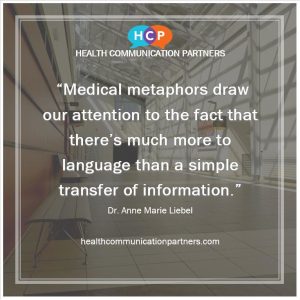 As I said in the earlier piece, metaphors are everywhere. Visual and verbal metaphors are used in medical education for teaching, as diagnostic tools, and as memory aids.

They’re used in patient education and public health messages. In one study, describing the flu metaphorically, instead of literally, was found to increased individuals’ willingness to get vaccinated.

But be careful with those metaphors.  One study shows that the dominant metaphors for describing cancer, “enemy and war metaphors,” may hurt cancer prevention efforts. And some people don’t prefer to think of their bodies as a battleground.

Widespread attention has been given to “the usage of inappropriate or unfamiliar metaphors which are not locally or culturally relevant” in med ed, public health, and patient education.

There’s benefits to “becoming aware of the nuances contained” in metaphors. So let’s get started.

We try to make things happen with language

We tend to think about communication as giving and getting information. But metaphors draw our attention to the fact there’s much more to language than a simple transfer of information.

We do things with language. We build things. We try to make things happen.

When it comes to communication and social interactions, linguists have identified multiple purposes or functions of language. James Gee (drawing on Halliday, for the linguists in the house) has identified seven of these.  Based on the physician’s comments, I’ll focus on two that will help you with your metaphors.

What’s the perspective in your metaphor?

Language in use isn’t neutral.

When we speak (or write) we reveal our perspective on quite a few things. Like how we think the world works. What we take for granted. What we think is important.

This is the point made with the classic ‘glass half full/half empty’ example. The language you use to describe something reveals your perspective. Not just on the glass, in this case, but on other things as well. (Like your optimism or pessimism.)

Regardless of the occasion, our language reveals our perspective on what Gee calls “being ‘normal,’ ‘acceptable,’ ‘right,’ ‘real,’ ‘the way things are,’ ‘the ways things ought to be,’ or ‘what people like us do’.” (p.2)

So, what perspective on the issue at hand is reflected in your metaphor?

To say it another way, what is your metaphor asking your listener to accept as normal, real, or appropriate?

Let’s use an example. One study looked at five key metaphors used in public policy debate on the legalization of euthanasia.

Four of these metaphors related to Alzheimer’s disease.

So, those who used these metaphors were asking us to accept that it was normal and appropriate, when talking about euthanasia, to also talk about Alzheimer’s disease.  The implication here is clear.

The study author found this perspective problematic. “All metaphors were found to be morally loaded and used influentially to stigmatize Alzheimer’s disease and mediate public opinion supporting the legalization of euthanasia as an end-of-life ‘solution’ for people with the disease.”

Take a look at some of your favorite metaphors.  Get nice and clear about the perspective each is advocating. Make sure it accurately reflects what you understand the situation or problem to be, and how you’re proposing it can be addressed.

What two things does your metaphor connect?

Put another way, our language reflects the connections we see (or want to see) between things.

We use language to try to help others see the relationships that we believe exist (or should exist) between people, things, and/or ideas. This is obviously a central concern in metaphors.  They are, after all, comparisons.

Going back to the euthanasia and Alzheimer’s example, the metaphors in the study all were used to make particular connections between Alzheimer’s and euthanasia. That is, to build specific relationships between the two.

The study author described the relationship as a problem/solution one: “euthanasia as an end-of-life ‘solution’ for people with the disease.”

One study deals at length with the prevalence of military metaphors to describe cancer. But the authors also describe how cancer has been connected metaphorically to:

Consider the connections that could be made between cancer and anything on this list of other concepts. It’s not hard to imagine how each of these relationships could have different effects on the listener.

What connections are you making in your metaphor?  Are those connections adequate for sending the message you want to send? What might your connections be leaving out, or oversimplifying?

This same study points out that the connections suggested by military metaphors for cancer were too limited, and limiting:

“In spite of their extensive use, military metaphors appear to provide insufficient lay understanding of cancer and cancer experience. Consequently, other metaphors have emerged to capture the more holistic approach to cancer that may go beyond fighting to acceptance and healing.”

You’re trying to make things happen with your metaphor

We use metaphors to do more than help someone understand a concept.  We also are trying to convince them to see it in a particular way. Our language indicates our perspective, and what connections we seek to make between ideas.

With these two steps, you can tune up your metaphors. And, as the physician at the start of the article said, give the message you want to give.

You can also take the pressure off yourself, if you’re feeling you must use some famous metaphor exactly as-is. You can use these steps to customize any metaphor for you, and your patients.

Every metaphor will have its advantages and limitations. So don’t expect your metaphor to win all the time.  As I’m arguing here, don’t be afraid of taking it apart, talking about it, and reworking it over time.

If you are interested in taking your metaphors seriously, this workshop shows you how to break down the metaphors you use, understand their cognitive and affective aspects, and evaluate them in use. On demand, right on this site.