You are here: Home / Podcast Episodes / How ordinary conversations in healthcare may contribute to health disparities

Can ordinary language undermine equity? Research has shown that health care providers can unintentionally contribute to health disparities. In this episode, we’ll take a look at the role that ordinary, everyday language can play in health disparities, and what you can do about it. 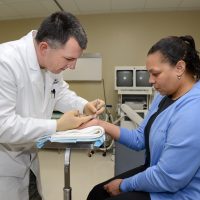 I’ve written before that as an educator, I see parallels between these findings and similar findings in the education sector. There are decades of research showing that teachers can unintentionally treat students differently based on race, class, gender, sexual orientation, language background, and more.

This is distressing considering that most of us who go into helping professions genuinely seek to make a positive difference in the world.

It’s easy to think, ‘Not it!’ But the fact remains that even as well-intentioned people we’re sometimes making assumptions we’re unaware of. As one provider put it to me, ‘I don’t want to unintentionally offend people.’ If that’s you, listen on. In this episode, we’ll take a look at the role ordinary language can play in health disparities, and importantly, what you can do about it.

When there’s talk about health disparities and providers, it’s usually around issues of implicit bias. Bias is a topic that can get people defensive easily, and sometimes that’s for good reason as I’ve written and talked about before. Some links in the transcript to other podcasts.

There’s a couple things I want to quickly say here in order to get where we’re headed, which is language.

You’ve probably already heard about the documented links between health care professionals’ unconscious bias, and disparities in receipt of health care, in multiple clinical outcomes. Bias has also been linked to underrepresentation of particular groups in studies and clinical trials.

Now, addressing health disparities can seem overwhelming, especially when health professionals are already under immense demands and pressures to be almost superhuman.  but often, the providers I’m talking with espouse values of equity and justice. And maybe you do, too, maybe that’s why you’re here.

I want to support you in this process, so I’m not giving you some impossible standard to live up to. I am taking an approach that won’t surprise you in talking about language. As you may know, I’m particularly interested in what language, literacy and education have to do with each other in (and beyond) the health sector. So we’re going to take a look at how bias emerges in ordinary conversations– first in med ed and then in the clinical environment.

Numerous studies have indicated how bias exists within health professions.  Foreign-trained doctors are treated unfairly in examinations.  Gender inequality persists in specialist medical colleges. Again, links to the research in the notes. And these biases are revealed partly through spoken language. Many of the people listening to this are saying ‘uh huh, tell me about it.’

One 2016 study looked at the microaggressions physicians can suffer:

“[Examples of such microaggressions] might include questioning where the practitioners received their degree, what country they were born in, or whether they are being supervised. Presumably there are innumerable permutations of microaggressions in health care delivery, experienced within all health care professions.”

Now let’s look at patients and the clinical environment.

A 2015 AJPH study they summarizes some different ways in which unconscious  attitudes can emerge in the care setting. What I really want to draw your attention to is how many of these processes happen (or fail to happen) almost entirely through ordinary conversations. So check out this list the authors give us:

“Subtle biases may be expressed in several ways: approaching patients with a dominant and condescending tone that decreases the likelihood that patients will feel heard and valued by their providers, failing to provide interpreters when needed, doing more or less thorough diagnostic work, recommending different treatment options for patients based on assumptions about their treatment adherence capabilities, and granting special privileges, such as allowing some families to visit patients after hours while limiting visitation for other families.”

Now in that list, there was no shouting or big bad guy–not that that doesn’t happen, of course it does, we all know this and we try not to do it. This is about subtle ways that well-meaning providers can provide unequal treatment without noticing.

I’ve written and talked and done workshops on microaggressions in health care environments.  One of the groundbreaking studies, Sue et al 2007, gives us this example from the clinical environment: “A client of color expresses concern in discussing racial issues with her therapist. Her therapist replies with, “When I see you, I don’t see color.” The hidden meaning is ‘Your racial experiences are not valid.’ This is one example of the theme of Color blindness.”

Nadal et al 2016 analyzed several studies highlighting the types of microaggressions that genderqueer people encounter. These are interesting for the mix of some that are written language use, some oral language use, and some multimodal language use:

For example, they discussed “encountering only binary (i.e., only male or female option) gender bathrooms at health care facilities, binary gender checkboxes on intake and insurance forms, insurance policies which either passively omitted or actively excluded transgender-specific services, such as hormone therapy or sex reassignment surgery, and discrimination during interactions with health care providers.”

Though providers contributing to disparities can sound kind of good guy/bad guy really quickly, things are often more subtle than this.  Our everyday words and actions (and silences and inactions) can and do contribute to discrimination, even unwittingly. This is, in part, because language is social.

What does that mean? I’ll turn to linguist Norman Fairclough in his Language and Power (1989, 2015):

“Linguistic phenomena are social in the sense that whenever people speak or listen or write or read, they do so in ways which are determined socially and have social effects.”

For the remainder of this episode, I’ll begin to dig into some of these ideas.

And we get these ideas and terms over time, through the many communities we’re part of. These are reinforced also, through media we consume, for example, or casual talk at dinner, or the ways we share stories in online groups. We are often unaware of these sophisticated workings of language in our everyday lives, as they are habitual.

It’s easy to think of the words and phrases we use everyday as normal, natural, value-free, or neutral. No big deal. But it’s actually not easy being intentional with your words.

There is an allegory in anthropology and ethnography, that my former professor Brian Street retold several times. It’s used to caution researchers about the ethnocentric bias. And it’s that the fish would be the last creature to discover water.

Among other things, this means it’s hard for us to notice our own language. But it’s necessary, if we don’t want our words working against us.

One way to catch ourselves in the act of implying negative messages we do not intend is by stepping back and listening to ourselves.

Here are some questions might help you take a different look at the situation:

Would I respond in this same way if this person reminded me of a beloved family member?

How would I respond if this person was one of my favorite celebrities?

Try asking these questions of yourself, even for just one day. The good news is, the tools to help your words flow from your values are already in your hands. Language is one of the most powerful tools in our human tool kit. Recognizing your power and your words’ power is what this is about. I’m going to go out on a limb here and say that:

I’m not suggesting that disparities will somehow fall away if we all just watch our language. Material realities need addressing as well. Systems-level action is necessary. And I am continually inspired by the work of health providers and public health professionals in addressing some of the most pernicious and difficult issues facing society.  If you’d like me to come and talk to your organization about this, go to health communication partners dot com and click on contact. There’s also an Addressing Implicit Bias audiobook bundle available right there on the site.

This has been 10 minutes to better patient communication. I’m Dr. Anne Marie Liebel.