You are here: Home / Podcast Episodes / Using microaggressions as a tool to address unconscious bias

I’m just back from New York, where I gave a webinar at Columbia University through the Mailman School of Public Health and Region 2 Public Health Training Center. This podcast episode takes up part of what I talked about in the webinar: unconscious bias as it shows up in our language.

We all want our words and actions to flow from our values. So it’s jarring to think we may be unintentionally contributing to health disparities through the way we talk.

In this episode, you’ll learn 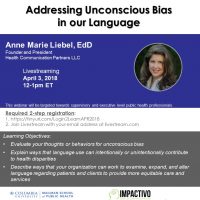 Over the course of last year, I spoke several times with an African American male physician. At one point, we were talking about his professional journey in medicine. He mentioned that he had learned to be more comfortable with, as he put it,

“…being the only Black person in the room. Hearing ‘How did YOU come to this job?’ as a not-thinly-veiled insult.”

During a separate conversation, months later, he asked me to help with unconscious bias in his communication. He was concerned that, at times, he might be unintentionally offending patients.

He was aware that, without intending to, he might be doing what was being done to him.

You know unconscious bias exists within and beyond the medical profession. You know it has multiple and serious negative effects. You also know everyone has unconscious biases, and that these emerge through words and actions.

And you want to do something about it.

I’m going to show you how one idea—a concept you might’ve heard before — can help you address hidden or unintentional bias in your language.

You know about unconscious bias. You may’ve taken the IAT. But what do you do about it?

Looking closely at your language is one concrete way to address unconscious bias.

“Another manifestation of unconscious racism is akin to the slip of the tongue. One might call it a slip of the mind. While one says what one intends, one fails to grasp the racist implications of one’s benignly motivated words or behavior.”

It’s unsettling to realize we may be offending people accidentally. But in the context of health care, the stakes are higher than some social tension. In terms of patient/provider relationships and health outcomes, the effects of these ‘slips of the mind’ can be dramatic.

There is a concept addressing these ‘benignly motivated words,’ that has guided empirical study in clinical psychology and in education for more than a decade. Microaggression research challenges bias and inequity through drawing attention to, and working with, everyday language. And clinical medicine is taking notice.

(Sue et al, 2007) defined Microaggressions as “brief and commonplace daily verbal, behavioral, and environmental indignities, whether intentional or unintentional, that communicate hostile, derogatory, or negative slights and insults” to members of marginalized groups. They are communicated through words and actions.

Sue et al’s  2007 article focused on racial microagressions. Since then, microaggression taxonomies have been developed focusing on gender, religious minority groups, ability status, age, class, and LGBTQ people, with more on the horizon.

Much microagression research focuses on the unintentional and unconscious manifestations of these brief, ordinary, negative remarks. Two of these forms include microinsults and microinvalidations. Both are subtle and demeaning; microinsults convey an insensitivity to someone’s identity, and microinvalidations minimize or negate someone’s experiences, as a member of a marginalized group.

Microaggression researchers often collect statements made or heard by study participants, along with contextualizing data, and identify patterns across these occurrences. It is common to read the hidden meaning of the microaggressions, and the ‘themes’ that emerge in the data analysis.

For instance, from this same Sue et al study, “A client of color expresses concern in discussing racial issues with her therapist. Her therapist replies with, “When I see you, I don’t see color.” The hidden meaning is Your racial experiences are not valid. This is one example of the theme of Color blindness.

Or from another study, Nadal et al 2016: “No homo!,” the not-very hidden meaning is “I do not want to be perceived as gay.” This is one example of the theme of associating LGBTQ identities with something negative

Microaggression is a useful concept to address unconscious bias in health communication. I share three ideas here, with ways to apply these lessons in your practice.

Some of the data in microaggressions research is collected from interactions between family members or friends! you don’t have to have a negative attitude toward someone to be engaging in microaggressions. It’s more about how we tend to speak from the cultural norms we hold, many of which are unconscious. And it may be that when you become aware of the impact of what you’ve said, you would consciously reject such a stereotype.

At some point in your life, it’s likely you have unintentionally offended someone you care about, someone in your family, someone you love. It’s because you were operating on cultural norms, and may have assuming things were untrue about this person or a social group they belonged to. Once you knew better, you did better.

When you’ve corrected yourself, what made you change? What new information did you get?  How did this impact the way you spoke to this person? Keep this in mind the next time you meet a patient from a different social group. You’ve been reflective about assumptions and their relationship to your langauge before; you can do it again.

Our language reflects what we think is normal, natural, or the way things should be. These are cultural norms that we may or may not be aware of. This is because language is inherited largely from our communities…and this happens largely unsconsiously.

And much of what we say escapes our notice…because we are on a kind of autopilot when we speak.

Borrow someone else’s point of view: involve a friend or family member in helping you ‘see’ your language from another vantage point. (Someone with whom you can have respectful disagreements.) Or consider pairing with a colleague, and helping each other make visible what’s often invisible. It can be easier to hear stereotypes in someone else’s language than in your own. This can also be a valuable time to brainstorm alternative statements or phrases.

These subtle messages in microaggressions add up over time. They have been shown to be the cause of significant health harms – psychologically and physiologically.

The next time you meet with a patient from a different social group, try to catch yourself in the act and be aware of your thoughts: what do you think you think of people in this social group? Does your language reflect this? It’s possible there may be hidden biases or prejudiced beliefs there.

Some researchers suggest this is how discrimination stays alive—by being passed on tacitly, sometimes without our notice. I invite you to sit with this possibility, and work on what you’ve got to work on.

I encounter health care professionals who actively confront discrimination and bias of all kinds. When it comes to language, it is remarkably easy to slip into autopilot. Microaggressions research offers some concrete ways forward.

If you are interested in taking your language use seriously, you could also look at your metaphors. I’ve written a workshop that shows you how to break down the metaphors you use, understand their cognitive and affective aspects, and evaluate them in use. On demand, right on this site.