You are here: Home / Podcast Episodes / How to ditch the deficit perspective

A deficit perspective relates to the common tendency to see someone different than us as someone less than us. In this episode, you’ll learn about 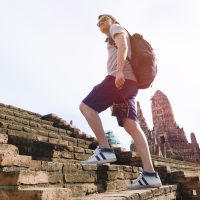 Recently, a medical educator wrote me in response to an earlier podcast called, “How a small change in what you say can improve your patient education.” She thanked me for giving a ‘name’ to the problem that is a deficit perspective. She knew what it was, but didn’t know it had a name.

Providers also face shrinking time to forge relationships with patients, pressure to adhere closely to ‘what works,’ and accountability requirements that eat into their time (and may even contradict their professional judgment).

In case you haven’t heard, I’ve written a workshop that helps you dig down and get better at one specific kind of language you use all the time – metaphors. We all use them and they’re powerful teaching tools. But they can also backfire.

So I’ve made a one hour, on-demand workshop for you, showing you how to break down the metaphors you use, understand their cognitive and affective aspects, and evaluate them in use. Right on health communication partners.com.

So what is a deficit perspective?

I have addressed deficit perspective before, relating it to Seeing patients as empty ‘containers’ to be ‘filled.’ Passive recipients. Not people with lives, thoughts, histories, or resources.

It can also relate to Maintaining a focus on what a patient doesn’t understand, or doesn’t do; what a patient’s situation lacks; what is seems his or her community can’t provide.

It can also refer to a focus that’s limited to negative results, negative effects, negative examples, depictions, or instances.

I’ve been keeping an eye on deficit views in education for more than a decade, and I know they can emerge in research, practice, and policy. Here’s how I have seen some deficit views show up in the health sector.

First of all, in research.

One is that the research in their field has been characterized by a deficit perspective. And two, this has harmed the field, and potentially those who work in it as well as the patients being served.

One study on  rural health found that the tendency of “embedding a deficit perspective in research has stereotyped rural and remote health as poor environments to work in and as inherently problematic.”

A second literature review, of health and well-being of sexual minority youth of color, found that “research with SMYoC has been framed by a lingering deficit perspective, rather than emphasizing normative developmental processes or cultural strengths.”  The authors point out several gaps in the research base as a result of this perspective, and “highlight areas for future research focused on minority stress, coping, and resilience of SMYoC.”

Some studies have found a deficit view in everyday practice.

One study, about how dentists perceive poverty and people on social assistance, found a dominant deficit perspective, in which “Dentists explained poverty by individual factors and emphasized individuals’ negative attitudes toward work and lack of capabilities.”

Significantly, “The results suggest the individualistic-deficit perspective impedes the care relationship between dentists and poor patients.”

The authors of another paper on health systems suggest that “Health system leaders and front line clinicians are prone to interpreting health literacy as a patient deficit.” They remark that it is “too easy to frame the problem as one that resides in the patient—that they have to develop certain skills, become more literate, be better able to navigate, use health services, and understand and follow orders.” They maintain this perspective is “implicitly reinforcing paternalism.”

A three-year empirical study on the impact of a set of ‘healthy school’ initiatives in the UK found these policies “position the body as being in deficit, unfinished, or at risk and, therefore, in need of rescue from conditions, ‘risks’, over which individuals or populations have increasingly less control.”

In the face of these policy pressures, “many [young people] not only take drastic action to lose weight and become ill but also become seriously depressed.”

Why does a deficit perspective happen?

As providers, you have a ‘problem’ focus when you meet with a patient. This is part of what the medical educator at the start was talking about. You’re there for the complaint, the illness, disease or injury.

You get to hear many things about what is ‘wrong’ with your patients.

I am not saying this leads to a deficit perspective. But it does seem to exert quite a lot of pressure toward seeing patients as collections of problems to be solved.

One way to think about a deficit perspective is as having its roots in an ethnocentric bias. This is our tendency to take for granted our own cultural practices. Our cultural position leads us to celebrate particular virtues. That’s all well and good.

Until another tendency kicks in: the tendency to describe something different from us as something less than us.

You could liken this to going to a new town, or even a new restaurant: we often judge it according to what it doesn’t have that we’re used to having. We focus on perceived weaknesses based on what we think is (or should be) normal, basic, fundamental, what it ought to be.

This is the ethnocentric bias.

And its effects are exponentially stronger when there is a marked power difference between the people involved.

This was the big kerfuffle in anthropology in the early-to-mid 20th century. Unknown lands tended to be judged by western European standards. So the language and customs of these ‘new’ groups were not considered on their own terms, but rather were seen in reference to the ways of the dominant group. Which tended to be where the anthropologists were from.

I’m not sure how I could scientifically prove that a deficit perspective is a waste of time. But it seems reasonable to assume that it’s, at best, naïve and counterproductive.

Here’s how to begin to be aware of a deficit perspective.

Turning away from a deficit perspective means being able to take some blinders off, in terms of what normal looks like. This in part means what you tend to take for granted that ‘normal’ people do in terms of reading, language use, learning, keeping healthy.  What you would consider ‘normal’ displays of intelligence, concern, curiosity, commitment, and so on.

What do you focus on instead? Got two things for you.

The idea is to help people be healthier and live longer. So you need as many resources as you can get. Acknowledge the resources (including the richness of language and culture) all patients bring to you. These resources might be overlooked or missed altogether –because of the pressure to be looking for something else.

Make explicit to yourself how you name and define ‘normal.’ Really tease these meanings out. Have standards, but be ready to look closely at what yours are, and at what it means to hold those standards rather than others.

We all can overgeneralize and rely on stereotypes – and sometimes (often?) we do this without noticing. Some dangers may come when the differences are perceived as deficiencies on which further action is based.

This has been 10 Minutes to Better Patient Communication. I’m Dr. Anne Marie Liebel. Thanks for listening.