You are here: Home / Podcast Episodes / Connect with patients who don’t talk like you

Heard about that ‘word gap’? So have we. This episode is to help you improve your communication, even when your patients don’t talk like you do. In this episode, you’ll learn:

And you’ll also learn about 2 other groovy podcast series with recent episodes that also take up the ‘word gap’ topic. Party on! 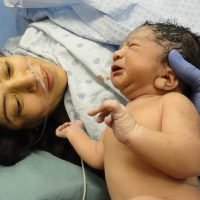 “I want to help these moms talk to their babies,” the physician told me.

She referenced a study that had identified a large gap in the words used by more educated parents and less educated parents with and around their children. I recalled the study she referenced and I started to catch on to her meaning. She and I would continue to talk about this so called ‘word gap’ for weeks. It turned out she had tried to broach this topic with some moms, but was unsuccessful. This conversation happened about 15 months ago, but I went and found my notes on it recently, after seeing the ‘word gap’ hit the news again. I’ll share with you what the physician and I talked about, give you some pointers for the next time you’re thinking about language and your patients, and end with four things you can do to improve communication with all your patients.

The so-called ‘word gap’ hit the news lately, in the form of two different podcasts and a flurry of social media activity. On July 1, “Vocal Fries” released an episode called “Don’t Mind the Gap” with an interview from Dr. Nelson Flores at the University of Pennsylvania. Ten days later, NPR’s “Code Switch” also tackled the so-called word gap in their episode, “Word Up.” They’re both interesting and informative so please check them out. Links in the show notes.

The physician and I continued to talk about this study. And I was concerned about what this study meant to her, what she took away from it, because it certainly had an impact. As she put it, this study portrayed the experience of the low-SES babies and toddlers as, “My mom does not talk to me other than to say stand up, sit down, shut up.” This was truly a terrible image for her to take away from the study, and I understood her concern to help address the situation any way she could. You want to do your best to help your patients and their families. This physician was genuinely concerned with helping parents do the best they can for their babies.

The controversial 1995 study that started this ’30 million word gap’ trend has gained tremendous attention over the years, positive and negative. The two podcasts (Vocal Fry and Code Switch) do a great job of filling in details and breaking it down, so again please check them both out. Here, I’m going to talk about this study as a way of connecting to health disparities. And I’m going focus on the deficit perspective.

I’ve also warned against educational programming based on deficit assumptions. As damaging as they are, they also can be tricky to catch, even for the most equity-minded people. It’s particularly important to call out deficit perspectives now. This is because recent research has shown how public health, medical care, and human service providers can unintentionally contribute to racial/ethnic health disparities. And some of this manifests itself through language that can slip into our use unconsciously.

This brings us to that so-called ’30 million word gap.’

The NPR Codeswitch podcast calls the 30 million an “incredibly catchy number.” Indeed. That number 30 million is big, splashy, and memorable. 30 million of anything seems imposing.  I can’t imagine anything that stresses the differences between you and your patient is going to bring you together and make your relationship stronger. Including claims of differences in quality and quantity of language.

This bundle of audiobook, eBook, and supplementary materials will help make your life easier. And it might change the way you think about patient education, no matter your specialization or patient population. You get practical, culturally and linguistically relevant advice and research-based tools, in an unfussy, conversational format. All sales support this podcast series.

Language is a social construct, and use of language a social act.  At the most basic level, we use language to be understood and to understand each other.

We are all speaking from a particular social positions.  If it helps, imagine you’re standing on a large map. You’re located in a physical position, but overlapping that are multiple circles– social circles that you belong to. Like a big venn diagram with you in the middle. Whatever we say is said from a viewpoint within the cultures of which we are members. (I’m speaking from my perspective right now; you’re listening from yours.) The world view and cultural background the provider and the patient come into play in the patient encounter. That’s right, your patient is also standing on a map, in the midst of various venn diagrams. Speaking from their position.

We want to be careful that we’re not tacitly accepting an argument  – as the “Don’t Mind the Gap” podcast points out – “that a particular cultural background is higher than another. We all have rich cultural and linguistic practices that we engage in.” You know, because you are alive in America today, that people who speak English with an accent, or even certain dialects of English, are often seen as inferior. This is nothing new. Dr. Flores points out how “The language practices of racialized and low income communities – all the way back to European colonialism – have been seen through a deficit lens.” Speaking a different dialect or language should not prejudice our attitudes towards others. But too often, it does.

This means that the so-called 30 million word gap can be memorable—even seductive–because there are ideas multiple generations deep, that might escape our conscious awareness, about those people and the way they speak. Make no mistake – Speakers of nonstandard dialects are well aware of the differences between their dialect and mainstream dialects, and of the cultural inequalities they imply.

Here are 4 things you can do to help shift from a deficit perspective to a resource perspective – with any patient:

That is, have some phrases that will encourage patients to take one more step to build on what they are already doing. “What would you be comfortable adding to that?” “Do you think you could do that 3 times a week instead of 2?” “If you like x, I think you’d really like y. Let me show you a website.” You might even include their background knowledge and the words they actually use. As Dr. Flores suggests, “if there are people who speak languages other than English, ask them how to say a few words in that language.”

Remember, between provider and patient are not issues of ‘correct’ and ‘incorrect’ language, but of worldview, sociocultural influences, assumptions and negotiations.

Reach out to colleagues who are also addressing issues of poverty, food insecurity, income inequality, and discrimination. Because you’re helping the patients in front of you, and keeping in mind the generations behind them.