You are here: Home / Culturally & Linguistically Appropriate / Providers, your language may have more power than you realize (Revisited)

It seems each of us knows someone who has cancer, is in recovery from cancer, or has died from cancer.

Near the start of this year, we ran an article (and later a podcast episode) called “Providers, your language may have more power than you realize.” That article begins with a recollection from a woman with cancer about an important conversation she had with her provider, a surgeon.

Though I did not mention it in the article, that woman’s name is Nancy. (She said I could tell you.)

Nancy allowed me to interview her- at length – about her thoughts and experiences as someone with cancer. She knew I was working with health communication, and she shared her thoughts, reflections, and parts of her story so that I could begin to understand, and so I could share them with you.

Nancy told me she saw her experience with cancer as a journey, part of the journey of her life.

And I wanted to begin honoring her by giving you a chance to read(or maybe read again) one moment in her journey that she recalled to me in our interview. About communication. An important moment for her in her relationship with her surgeon. It’s one of the moments she shared with me, and it is the heart of this article.

I look forward to sharing with you many of the stories and insights’ from my interview with Nancy in the coming months.

With enormous gratitude to Nancy and love to her family, here is a replay of our article, “Providers, your language may have more power than you realize.”   Thank you.

I was recently speaking with a woman who has Stage III ovarian cancer. We were talking about the language that gets used around cancer and other terminal diseases.

She retold one conversation that stood out to her, because of her surgeon’s careful use of language:

The seemingly simple change of one pronoun communicated volumes to this woman.

As providers, your language matters. Your words matter. Maybe more than you think they do.

Linguists, lawyers, and policy wonks can all agree on this: language is intimately tied to power.

It’s easy to think of how talk is power if you’re, say, an elected official, a public figure, or the head of a company. But it’s true for each of us, everyday, in our ordinary conversations. Looking closely at everyday ordinary language can show you some of its relationships to power that often go unnoticed.

And if you want to make your communication count, it will help to take a look at some of the particulars. I’ll tell you about a body of research that’s been doing just that.  And then I’ll give you four ways to look closely at your own language.

Research in these traditions often will focus on conversation where there’s a great deal at stake, and also often a marked power imbalance: between teachers and students; judges or law enforcement and plaintiffs; and health care providers and patients.

In 1977, Labov & Fanshel wrote Therapeutic Discourse, a book-length analysis of a 15 minute segment of speech between a patient and her psychotherapist.

This book drew major attention to the many things people do through language in health-related interactions. Researchers have been examining the relationships between language and power in health care ever since, by analyzing actual recorded conversations. 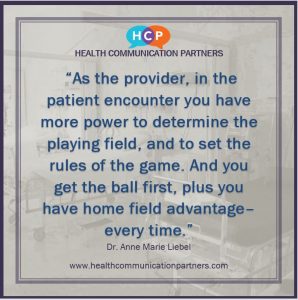 Conversationally speaking, the patient encounter is not a level playing field. You know this already, and the research bears it out.

–and that it was possible to find evidence for these assumptions through careful analysis of the language used between doctors and patients.

It can be easy to think that power goes one way: top-down. Yet in the patient encounter, even though the physician holds the most powerful position in many senses, the patient also has power and can exercise power. Power is a two-way street.

But it’s our collective taken-for-granted assumptions about medical encounters that shape the way the conversation usually goes.

Several recent studies use Fairclough’s approach to critical discourse analysis to examine the relationships between language and power: in patient participation; in conversations between patients and clinicians, and among clinicians themselves, regarding dialysis and in managing medication; and in communication among members of a newly-formed care team.

As this body of research has grown, several points have been made. I’m going to talk about one in particular, so you can increase your awareness and have more control over your language.

One of the ways your language reflects power is in framing, or setting out the parameters of what is talked about and how.

It can be easier to notice framing when you don’t agree with it.

Whatever your favorite news source, when you listen to a different network, it can put your teeth on edge. The way issues are handled just seems ridiculous or wrong to you. People you might consider heroic are demonized. Problems that you see as economic in nature are recast as problems of domestic policy. And so on.

But beyond the wide-brush strokes of political partisan writing, there are subtle everyday ways that our language does similar framing work. I have written before about how linguists have shown that our language—whether we’re conscious of it or not–communicates what we think is important, normal, or taken for granted. It encourages certain ways of thinking and discourages others; privileges certain concepts over others, and more.

When we’re the more powerful person in a conversation, we also have more power to decide what is polite or appropriate communication and what is not; who takes turns; when the conversation is over, and more.

In the patient encounter, you have first say in determining what’s on the conversational table (and what isn’t).

Another way of putting this: you have more power to make topics talk-about-able.

You do more than hold sway over what’s talk-about-able. your language indicates how it should preferably be talked about.

And you do this in all sorts of ways, some of which are embedded in your entirely ordinary everyday patient conversations.

As the provider, in the patient encounter you have more power to determine the playing field, and to set the rules of the game. And you get the ball first, plus you have home field advantage–every time.

Here are two examples from recent studies using critical discourse analysis. Studies in this tradition rely on taking audio or video recordings of actual conversation as they happen, and transcribing and analyzing them. So, these are quotes from practitioners in action with real patients.

One study analyzed the power of the words, phrases and metaphors used by midwives, lactation consultants and breastfeeding mothers. Here is one particularly evocative phrase used by a midwife to a mother:

Your nipples are a bit tender because you’re not used to having this little piranha hanging off them every five minutes (Midwife, Interaction 13).

The authors point out that “Comparing the newborn breastfeeding infant to a fish whose teeth and jaws are destructive and whose appetite is insatiable positions the newborn baby as potentially an ‘enemy’.” Not a warm and fuzzy image.

This specific language made a difference. It entered into the mother’s thinking in a powerful enough way that she used the piranha metaphor herself, in an interview, six weeks later.

Another study deals with the effects of how conversations about palliative care are initiated. In one case, they record the conversation when a physician was called to the emergency room “for a consultation with a patient diagnosed with lung cancer and suffering from difficulty breathing.” The physician said:

Hi, I am Dr [name omitted]. I am a family physician. I’m the one who helps with pain and symptom control this week. Here we call it palliative care, but elsewhere it’s called differently. So I’m the one who will be taking care of you this week…

This physician opens with the language of family practice rather than palliative care. The physician downplays what the authors call “the label of palliative care, which is often associated with end-of-life care.”

Furthermore, in this opening statement, the physician frames the patient’s condition as needing management of pain and symptoms, rather than end-of-life care. And that a week, at least, stretches out before them.

Here’s what you can do

These ideas have been taken up by fields within clinical medicine, medical education, and public health. I bring them up here because they apply across situations and specializations.

Here’s what you can do about it:

notice what you say that helps get the effects you want.

In other words, when something good happens, note what you said.

For instance, keep track of what you said when someone really opened up. Or when you were able to move in the direction of a positive relationship. Notice when patients quieted down or got defensive.

How do you do that?

Here are four discrete uses of language that are relatively easy to spot:

Try keeping track of just one of these four, in your patient encounters. And remember, people are different, so take the pressure off yourself to get it right every time.  Just because a phrase clicked with one person doesn’t mean it will click with another person. You’re looking for patterns.

The tools are in your hands

You are always building relationships with patients, and you only get so much time with them.  The good news is, the tools to make your communication better are already in your hands.

Recognizing your power and your words’ power is what this is about. The perspectives shared here can help you see the power your language has to make things seem normal and talk-about-able—or problematic, and in need of some shifting.