You are here: Home / Podcast Episodes / [Rebroadcast] Why talking about unconscious bias can make people nervous

Right now, I’m supporting the folks at Cleveland Clinic in their ongoing work addressing bias. I thought this would be a good time to replay an early episode, where I talk about some of what I’ve learned over the years about people’s fears around addressing bias. 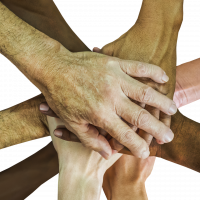 Examining and addressing implicit or unconscious biases has become an important goal for many in the health care community. Everyone has such biases, and their consequences are significant. But addressing bias is slow and difficult work, and I can say that because I’ve been involved in this work for years.

Right now, I’m helping the folks at Cleveland Clinic in addressing bias. So I thought it would be a good time to replay this episode, where I talk about some of what I’ve learned over the years about people’s fears around addressing bias. You’ll learn about people’s personal fears but also people’s concerns about organizations & institutions, when it comes to discussing unconscious or implicit bias.

In addition to what I share with you at the end of this episode, if you would like support in addressing implicit or unconscious bias in your organization, remember I have an audiobook bundle of resources ready for you to use right now–immediate download–on HealthCommunicationPartners.com

Similarly, a recent editorial in the Journal of Gerontological Nursing indicates that unconscious bias is “a universal trait and important for survival,” and that “even educated individuals with the best intentions can display” it.

As much as bias may be “human nature” or “a universal trait,” it is an obstacle, a blind spot –with some serious consequences. Unconscious bias on the part of health care providers has been linked to errors in clinical decision making.

Numerous studies have also indicated how this bias exists within health professions. As a result, models, guidance, and theoretical orientations have been developed to address bias and stereotyping. Some specializations and programs have made a goal of diversity and equity in the workplace.

But getting down to the work of actually addressing unconscious bias can make people nervous. And some of that, I argue, is with good reason. It’s important to acknowledge this so we can take appropriate steps – whether we’re talking about our own unconscious biases, or it’s our job to facilitate others in talking about theirs.

And that’s what this episode is about.

I started talking about unconscious bias more than a dozen years ago, starting with my own.  For a decade now, I’ve also been leading conversations with others about examining our biases and assumptions as practitioners.  It is a long, difficult, entirely worthwhile journey. Here is some of what I have learned about why this process can make us uncomfortable—and some starting steps.

I have found people’s fears or doubts around addressing bias and stereotypes can cluster into two groups:

I’m already thinking about this

When I first began the process of confronting my own biases, I had already been teaching for several years. I remember thinking—and sometimes saying—things like, “I haven’t not been thinking about biases and prejudices all this time. I work hard. I care about all my students.”

As thoughtful, well-educated people who take our professional commitments seriously, We likely have good reasons for thinking we’ve already done our best to understand the communities we work with, and how we do that work.

Don’t tell me I’ve been doing it wrong

No, we don’t like the idea of others criticizing us.  Conversations about unconscious bias can conjure fears of being attacked.  They certainly did for me. It can feel like a personal showdown, as if one party is wrong and the other right.

Similarly, most of us want to avoid feelings of awkwardness, or pain. What might come from looking hard at ourselves.  Or at the communities we came from, and the histories of those communities.  All of this is potentially involved with conversations about bias and stereotypes.

That’s just the way it is

The process of facing biases or stereotypes is risky business. So is any threat to the status quo. Wherever we are as individuals in the social hierarchy, it can be threatening to acknowledge

These networks and systems can be large-scale, like schools, health systems, carceral systems, the ‘open market.’ They may be smaller-scale or local, like neighborhoods, online communities, or voting precincts. Acknowledging these contextual realities may show us things we’d rather not see.  Or, make us aware there’s more responsibility on our shoulders.

When I began my doctoral program, there was an explicit agreement that part of this process involved my examination of my assumptions and beliefs, including assumptions I held about the communities I was serving. I didn’t fully understand what that meant at the time.  But I believed in the program and the people in it. I trusted that these experiences would reward my willingness to do this work. And for the most part, that was true. I know this is not always the case.

This kind of work can mean our taking a close look at the relationships we have to the various organizations and institutions of which we’re a part. And deciding in whom, or what, we’re willing to place our trust.

Examining our biases and assumptions is intensely personal. It invites vulnerability. And it’s sometimes done alongside colleagues, or in front of someone in a supervisory position. I had some very patient and skillful instructors and classmates, who had been facing their own assumptions for years before I did. They certainly helped when I started this process.  But some of my classmates and I did argue.  My students argued among themselves.  Some argued with me.

Those who lead groups in examining biases need to be able to facilitate and explore–and not shut down–such tense interactions. Because they will happen, if learners are committed to fronting their assumptions and examining them (and not just pretending to).

Being able to check the box

Addressing our own biases and stereotypes is not something we can ever get right. We don’t land, or arrive, or get the good grade. We are not often recognized or rewarded for this in our organizations.

Beyond asking individuals to address their own biases, what is being done at an organizational level to address bias and stereotypes in existing systems and processes?

For instance, If a learner is asked to examine their unconscious bias and stereotypes as part of a class, or a quality initiative, it can’t just stop there. what parallel action is happening at an institutional level?

Additionally, how is that learner protected, supported, and not left feeling exposed?

If these concerns are not taken seriously, we may run the risk of doing more harm. We cannot continue to expect the solutions to deep-seated, systemic problems to be provided by those least served by these same systems.  The heavy lifting should not be done by those already carrying disproportionate burdens.

I’ve been talking about the challenges I have come to know as part of the work of addressing unconscious bias.   But because it is difficult does not mean we turn away. So what can you do?

Be conscious of the difficulties inherent in this work. That means in part being patient with yourself and with others. If you’re in a group, I recommend collecting readings and videos as a way to anchor discussions and a provide a bit of emotional breathing room.

It also means marshalling real institutional support and systems-level thinking. Take a look at one structure or process in your organization that may be marginalizing certain groups, even unintentionally.