You are here: Home / Podcast Episodes / One way LGBTQI health disparities are connected to everyday language

COVID-19 is hitting marginalized communities the hardest. This has brought new attention to already-existing health disparities. In this episode, you’ll learn about 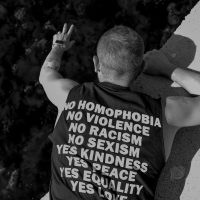 It has been well documented that COVID-19 disproportionally impacts marginalized populations in what one researcher has called an “intersectionality of disadvantage.”

If you’ve read around HealthCommunicationPartners.com, or heard other episodes in this podcast series, you know I’m one of the people interested in how health disparities are related to words, phrases and terms used around issues of health. So this episode is about LGBTQI health disparities, their connections to the way language is used in health settings, and what you can do to improve the relationship between the two. This is 10 Minutes to Better Patient Communication from Health Communication Partners. I’m Dr. Anne Marie Liebel.

HealthyPeople2020 summarizes research which suggests that “LGBT individuals face health disparities linked to societal stigma, discrimination, and denial of their civil and human rights.” They link to studies behind these health disparities, which include:

Now when you put these disparities on top of the social and economic and health realities of this global pandemic, you have what that researcher called an intersectionality of disadvantage.

Health disparities are due to many factors that are man-made. You may already be aware of the documented links between disparities in people’s receipt of health care and health care professionals’ implicit bias.

As an educator, I see parallels between these findings and similar findings in the education sector. There, too, is a body of research showing that teachers can unintentionally treat students differently based on race, class, gender identity, sexual orientation, language background, and more.

This is distressing, considering that most of us in helping professions genuinely seek to serve everyone equally. So I’m digging into the research base, and my 20+ years of experience with students and faculty, for what I’m going to share.

Specifically, I’m offering something that’s a way to think about, and potentially to work with, everyday language. As health professionals, your language, in part, constitutes care.

What does this have to do with disparities?

There are subtle ways our everyday language can unintentionally disadvantage certain social or cultural groups. Words and silences in clinical interactions can erode equity, even (and perhaps especially) when clinicians don’t notice them. Looking closely at our language is one concrete way to address unconscious bias. And the health disparities attached to it.

As NPR reports, nearly 1 in 5 LGBTQ adults has avoided seeking medical care for fear of discrimination. It can be jarring for health professionals to think about unintentionally contributing to health disparities through ordinary clinical interactions.  This is where I join others who suggest microaggression research can be a useful resource. Microaggression research challenges bias and inequity through drawing attention to, and working with, everyday language.

What are microaggressions? Just to refresh, in 2007, Sue et al defined microaggressions as “brief and commonplace daily verbal, behavioral, and environmental indignities, whether intentional or unintentional, that communicate hostile, derogatory, or negative slights and insults” to members of marginalized groups. These are communicated through words and actions.

I was in graduate school at the time this study was published, and a member of the research team came to my university to discuss it. It made such a powerful impression on me that I still have the paper handout from that talk all these years later. Sue et al’s article focused on racial microaggressions. Since then, microaggression taxonomies have been developed focusing on LGBTQI people, and other social groups.

Microaggressions do real harm. Here is a brief sample of some recent research into LGBTQ harms specifically from microaggressions. Links to these studies are obviously gonna be in the notes.

I want to point out that it’s not realistic to assume LGBTQI people are experiencing only one form of discrimination. Many of the studies I just referred to are informed by intersectionality.

Microaggression researchers often collect statements made or heard by study participants, along with contextualizing data, and then they identify patterns across these occurrences. It is common to read of ‘themes’ that emerge in the data analysis, along with some examples.

I offer here some of what I’ve adapted from a recent review of literature from Nadal, Whitman, Davis, Erqzo & Davidoff called “Microaggressions Toward Lesbian, Gay, Bisexual, Transgender, Queer, and Genderqueer People: A Review of the Literature.” Now the authors categorized microaggressions they found into themes and I’m going to share some of them here.

Knowing there is not a way to remove bias from our language once and for all, I invite you to be a learner, listener, and an observer of language.