You are here: Home / Podcast Episodes / Communication and the death of a pet

If, on the other hand, you ARE an animal person, this episode is for you.

If your practice ever involves children at any point, this episode is for you.

It’s a love letter, courtesy of my cat. 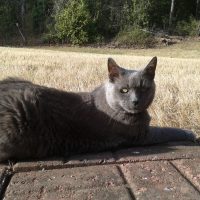 “We’ll see you and Katie on Monday. Take it easy this weekend,” the vet tech says on the other end of the phone.

“Thanks,” I say, and my voice can’t escape cracking, and I hang up the phone and cry.

It’s Saturday. The Monday appointment will likely have only one outcome.

I am standing at my bedroom window looking out. Katie is curled up in her spot on the sofa in the living room. It is about 10am.

Katie has been in my life for 15 years, spanning 4 homes, multiple relationships, and the entirety of my doctoral program. I found her at the Women’s Humane Society in Bensalem, PA. The day I adopted her, she weighed a single pound. The staff there had started calling her Thumbelina on account of her tiny size.

Mostly an indoor cat, Katie has also managed to be a good hunter over the years. Mice, moles, voles, the odd rabbit, even a sewer rat (once). But her preferred milieu was chipmunks, which she would sometimes bring into the house with her, dead or alive. Just this Mother’s Day, she caught (and released) a bunny, to show she still had game.

Last year, I was in attendance when the Academy of Communication in Healthcare  gave their inaugural Healthcare Communication Teaching Excellence Award. Their choice, they admitted, was perhaps an unexpected one: it went to a veterinarian.  Jane Shaw, DVM, PhD, Associate Professor of Veterinary Communication at Colorado State University.

It’s true, I had not thought before about veterinarian-client-patient communication. About how that, too, can be relationship-centered care. About how important communication skills are, during challenging conversations. I have thought about this many times since then. Including when I was hanging up with the veterinarian’s office on Saturday morning.

We had been talking about Katie’s condition. But the conversation ended in a way that caught me off guard: “Take it easy this weekend.” That one sentence made a difference. Until that moment, it had been all about Katie. But then the provider made it about me, her caregiver. No, I was not the patient, but I was responsible for her care, and ultimately for decisions about that care. And it would, the vet tech knew, be difficult for me, and for Katie, every moment from then on.

I pick up Katie and take her out back onto the patio and set her down. Ever a creature of habit, she haltingly walks over and drinks from the little fountain that decorates one corner of the patio, as she has done for years. I am sobbing now. I sit on the concrete floor next to her while she drinks. There is nothing else to do.

It’s terrible timing. My cousin, her husband, and their little girl are visiting from out of state for the weekend. They arrive when I’m on the patio. I come in to greet them, still full of tears. They have cats. They ask good questions. They are sad along with me.

Eventually their 4-year-old tries to play with Katie but doesn’t get much response. She pets her instead.

I wonder about talking with kids about death. The kids in my life–my two young nieces–are 700 miles away. They have known Katie all their lives. Do they know about death?

I text my brother, their dad. “Hey man just want to ask: do you want the girls to have a chance to say goodbye to Katie? It’s fine whatever you choose.”

I think about advice from Mr. Rogers. Sesame Street. Jim Henson. They all knew how important it is to talk openly with children about death. They modeled it, they reinforced it. Perhaps most importantly, they gave parents language and opportunities to begin these conversations with their kids (so please check out their great resources, and Colorado State’s).

I wondered what my brother would want for his kids. A text came back:

“Hey sorry to hear but thanks for thinking of us. I’ve told the girls and they would like to visit online when possible.”

About an hour later we do a video call. I keep the phone camera facing toward Katie who’s back in her spot on the sofa.

The 8 year old appears first. She asks me a straightforward question: “What will you do when Katie dies?”

She leaves the video quickly, goes to her piano and sits, and starts to play. The 12-year old comes into view but has little to say. The camera stays on Katie. I remind my niece that we knew 7 months ago – before their visit for Christmas – that this day would come. She says goodbye to Katie, as I pet her. My brother says goodbye too, and we hang up.

Katie knows her own mind. She is also an excellent communicator. Though meows were sometimes employed, nothing could have been plainer than her non-vocal communication. Standing at the door, she would fix her gaze on me until I noticed she was there. Then she would look out the door, then look back at me, then out the door again. She repeated this, making eye contact every time, until I got the point and opened the flippin’ door already. Food dish, same story.

Katie was an especially compelling communicator when she wanted you to pet her. She would find a spot about three feet away from you, dramatically flop herself on the ground, and stare at you until you conceded and gave her some love. If you were in motion, she would anticipate where you were going, fling herself in your path, and gaze up with a look that lovingly implied you were a damn fool if you stepped on her. Clearly you should be petting her instead of this walking around malarkey for crying out loud.

She has never been that warm and cuddly lap cat. She also has never been particularly social. So to the surprise of everyone, over the past few years, Katie developed a fondness for kids. She lets even the youngest toddlers play with her, poke her, follow her around, pet her, even pick her up. She does not complain.

Later in the afternoon, the doorbell rings.  It’s the next door neighbor with her two young boys. The younger boy, a toddler, has been fascinated by Katie from the first time he saw her.  Because of Katie, “cat” was one of his first words. When he saw Katie outside, which was often, it seemed he’d exclaim “Cat!” with his whole body, wriggling in delight.

I stand stunned for a moment at the coincidental timing. They are returning something and saying hello. I ask them in.

I tell the mom about Katie. I ask her if the boys want to pet Katie and say goodbye. She says yes, as the boys are already headed toward Katie at her usual spot on the sofa. Mom and kids knew Katie’s health had been failing. Last year, their yellow lab had died from an autoimmune disease. She tells her boys that Katie will be joining their dog soon. She wonders aloud if they know what that means. The toddler pulls Katie’s tail. They linger a few moments, and then say goodbye.

I suppose any one death can invite us to think of every death. Every death we’ve ever seen. Those we’ll eventually see. And our own.

My cousin takes their daughter to the pool, and I go upstairs to my home office to get some work done. I hurry to finish one writing task and then come downstairs and go to Katie. I am suddenly greedy for a few minutes alone with her, so I pick up the pillow she’s laying on and carry her out to the patio again. Cat, pillow and all. I need some air, and she loves outside more than anything in the world. She gets up off the pillow, slowly, takes only a few steps and lays down on the concrete, lowering her body delicately, intentionally, incrementally.

Again I sit on the ground next to her. She lays on her side, entirely flat, head extended, tail extended, feeling the warm concrete on her old bones. I worry it might be too hot for her out here, in the June sun, but clouds are moving in, giving us a bit of a break.

I pet her and watch her breathing. Watch her eyes, her face. Watch the end of her tail twitching.

The wind picks up. The temperature edges lower. She lifts her head to sniff the changing air, then sets it back down again. I continue to pet the side of her face, her chin, the space in front of her ears.

A noisy bird carries on nearby.

Looking at the sky after a few minutes, I say, “I think it’s time we went in, Katie.” I know that she generally dislikes storms. Yet she seems to be enjoying the warm patio. I hesitate for a moment, then reluctantly pick her up. Slowly, slowly. She weighs so little now. We go back inside together, as thunder warns of the coming rain.