US House Ways and Means Chairman Richard Neal recently wrote a series of letters to the leaders of seven medical professional societies. There’s three reasons why this is important, and one thing you can do right now to help address implicit bias in your own language. 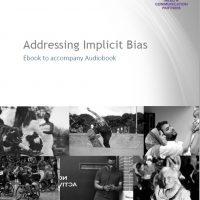 You may have heard that recently, US House Ways and Means Chairman Richard Neal wrote a series of letters to the leaders of seven medical professional societies. These letters, I believe, are significant, and I’m going to tell you three of the reasons why.

In these letters, Chariman Neal asserts that “As clinicians, health equity scholars, and medical professional societies continue to work toward eliminating racial health inequities, the consequences to health and the perpetuation of unequal outcomes make this work more urgent than ever. We must redouble our efforts.”

Now these letters and the report that preceded them are important in several ways but I’m going to share three that are top of mind for me now.

One is that they indicate the level of attention to health inequalities as intersecting with and caused by social injustices. This is a set of problems more and more people are caring about, and caring about visibly, today, perhaps more than ever.

Professionals across the health sector are stopping and asking hard questions of ourselves. About what we do, what we take for granted, how we can do better. People want to turn awareness of inequalities into action on inequalities, more and more. Because there’s nothing natural about health disparities.

That brings me to the second reason why I think this series of letters is important: the doubling down. The sense of urgency. The Chairman says “We must redouble our efforts.”

Health disparities are not new, and it’s not like many people have not already been working on them.

You know, Americans experience variable access to health care. You know that it’s based on race, ethnicity, socioeconomic status, age, disability status, sexual orientation, gender identity, and residential location. (from the Agency for Healthcare Research and Quality 2016 National Healthcare Quality and Disparities Report). You come here and listen to this show because you have an interest in health equity and justice. You are the people who have already been doing the work. You’re reading, you’re tweeting, you’re protesting, you’re presenting, you’re representing. And Chairman Neal is asking us all to double down.

That brings me to a third reason why I think this set of letters is significant. Health disparities are due to many factors that are man-made. One of them, as Chairman Neal pointed out, is bias. Front and center, and it looks like he’s gonna put his money where his mouth is. He cites research on the “racial bias in tools used by physicians and other providers to make clinical decisions.”

There are numerous studies have indicated how bias exists within health professions. Colleague to colleague, there’s bias in promotion, bias in research and clinical trials. You’ve no doubt heard of bias toward patients in the clinical environment.

As an educator, I see parallels between these findings and similar findings in the education sector. There, too, is a body of research showing that teachers can unintentionally treat students differently based on race, class, gender identity, sexual orientation, language background, and more. Curricular materials can be biased, disciplinary policies are often biased. This is distressing, considering that most of us in helping professions genuinely seek to serve everyone equally, and think we’re doing a pretty decent job at it.

This is part of why bias, in particular, needs to be dealt with carefully, and with known methods–systemic approaches that also involve individuals.

So I’m digging into the research base, and my 20+ years of experience with students and faculty, to share with you one approach to addressing bias that has been used for decades, and can complement and enrich other approaches. And it has to do with language.

Because language is a durable, flexible structure. It’s everywhere. Everyday conversations. Also in our policies and laws.

Where does this come into bias? Because bias is produced, reproduced, and transmitted largely through language, and this often happens without our notice. There are subtle ways our everyday language can unintentionally disadvantage certain social or cultural groups. The language in ordinary institutional policies and practices can also unwittingly contain and reflect bias.

Bias comes into the picture because we don’t always catch the implications or hidden meanings in the words and phrases we use. And we wind up saying or writing things that we would consciously reject. That’s how our everyday words and language practices can and do contribute to discrimination, even unintentionally.

This happens to everyone. As researcher Derald Wing Sue said,

@NewsHour It’s important for people to realize that no one is immune from inheriting the biases of their ancestors. #NewsHourChats

But there are research-based steps you can take, right now.

I’m introducing the second edition of Addressing Implicit Bias Audiobook Bundle. It’s newly revised and expanded. It helps you examine language and its often-hidden connections to biases. This is a bundle of resources, I made it, and it will help you to address implicit bias in your own language, and take steps toward addressing bias in your organization.

And it’s affordable! Less than the cover charge at Trader Joe’s. Available as a digital download right now at HealthCommunicationPartners.com.

This bundle solves the problem of where to start addressing bias in a way that’s meaningful and impactful, that you can do alone or with a group. It’s also a way to double down – because this approach can complement and enrich other ways you and your organization are addressing bias.

Contact me for Discounted pricing on Class Sets and Institutional copies. Go to healthcommunicationcpartners.com/contact.
This is not about adding one more thing to your already crowded day. It’s about improving, extending and enriching what are you already doing and saying. And it’s a time-tested approach based in decades of the best studies in the world on connections between language, culture, and power. It’s available right now, for immediate download, at healthcommunicationpartners.com

From the Ways and Means Committee Press release:

Read the letter to the Accreditation Council for Graduate Medical Education HERE.

Read the letter to the American College of Cardiology HERE.

Read the letter to the American College of Obstetricians and Gynecologists HERE.

Read the letter to the American Heart Association HERE.

Read the letter to the American Medical Association HERE.

Read the letter to the American Society of Nephrology HERE.

Read the letter to the American Thoracic Society HERE.